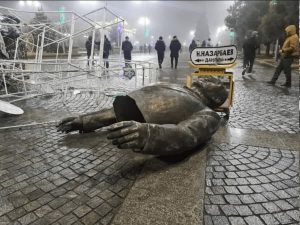 Below are the few episodes reflecting our thinking while we were following the events in Kazakhstan in the first days of January 2022. We present the pieces which were translated by the CrimethInc collective from Russian to English.

Who are behind the “violent” resistance?

In the whirlpool of events we are still trying to analyze something, not to dissolve in the information noise.

Perhaps the most interesting question for us is: what groups and forces are involved in the events in Almaty, where the scenario of confrontation is the most radical and violent at the moment? It is impossible to answer unequivocally right now.

END_OF_DOCUMENT_TOKEN_TO_BE_REPLACED

Posted in General | Comments Off on Uprising in Kazakhstan. Review of «Anarchist Fighter» 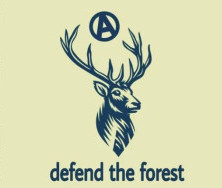 We received an inspiring email from Carpathian mountains where activists took actions to protect the forest.

In the beginning of this autumn one of the many Carpathian logging sites was attacked in Ukraine. It was an act of resistance against the business, the state and anthropocentrism.

Timber carrier got a sugar injection in its gas tank.

END_OF_DOCUMENT_TOKEN_TO_BE_REPLACED

Posted in General | Comments Off on People of Carpathian mountains are taking the action. Logging vehicles destroyed

Malmö, Sweden. “Burn the virus of capitalism!” Destroyed the transport of the company, which saved on the health of the elderly 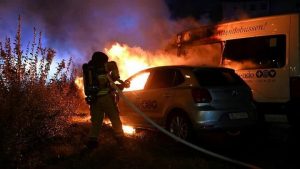 We love to receive revolutionary news from readers from Sweden. This time, the direct action allowed a new perspective to shed light on the situation with the pandemic in Sweden, known for its “special approaches” to the coronavirus. In this social state, many people died because of the greed of private owners of nursing homes. But the comrades proved that no one had forgotten or forgiven them.

Thousands of people have died in Sweden during the coronavirus pandemic. At least some of these tragic deaths were caused by the way the epidemic was confronted by the privatized health care system. END_OF_DOCUMENT_TOKEN_TO_BE_REPLACED

Posted in General | Comments Off on Malmö, Sweden. “Burn the virus of capitalism!” Destroyed the transport of the company, which saved on the health of the elderly 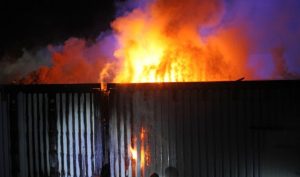 We set on fire three large trailers of the British-Dutch corporation Shell at the gas station of the company in Lund (Sweden) in the night of August 27. The reason to take Shell as an aim for attack was Shell`s participation in the construction of the natural gas pipeline Nord Stream 2 as an investor. This action was carried out within the International Week of Solidarity With Anarchist Prisoners (August 23–30).

Nord Stream 2 belongs to the Russian State Corporation Gazprom and it is a strategic project of Putin’s regime. This gas pipeline will become a serious weapon in the hands of the dictatorship. Nevertheless, Shell and several more Western companies help the Russian state economically.

END_OF_DOCUMENT_TOKEN_TO_BE_REPLACED 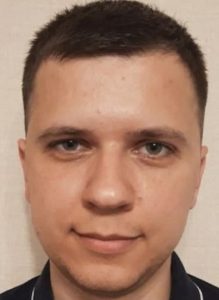 The enemy were assuming an easy victory, thinking they could once again abuse their victim and get away with it. SWAT team wasn’t with them, it seems they haven’t even bothered to wear bulletproof vests. For they deem themselves the top dogs, the very sight of them causes mere mortals to quake with fear. Or so they thought. But this time they were wrong.

An armed fighter was waiting for them behind the door they expected to easily break down. Brave young man, ready to kill and to die. His name was Andrey Yurievich Zeltser. 32-year-old programmer from Minsk. END_OF_DOCUMENT_TOKEN_TO_BE_REPLACED

Posted in General | Comments Off on Minsk resident Andrei Zeltser died in battle, repelling an attack by KGB officers 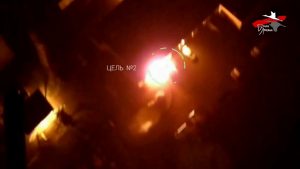 The Black Stork group has dropped two 5-liter tanks filled with flammable liquid. These drops from a great height were carried out with an interval of 20 seconds between them.

The strikes were accompanied by loud bangs and flashes, waking up the whole OMON snake pit from neighboring houses. The impact sites are marked with arrows on the map.

END_OF_DOCUMENT_TOKEN_TO_BE_REPLACED

Don’t give up, don’t give out. Tortures and confessions 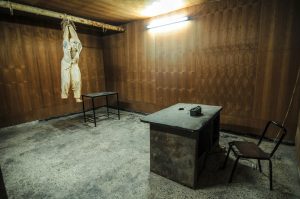 Since 2017 our movement has faced the repressions of the scale and intensity previously unseen. The main “spice” of the situation is massive usage of tortures by FSB secret service. Before the cases of beatings and tortures of the anarchists in Russia, Ukraine and Belarus were mere separate exclusions. We’ve heard that Jihadists and Fascists are tortured brutally. Someone would also recall “Odessa case” against communists and anarchists. But one thing is “to know” abstractly and to experience on your own is something very different. END_OF_DOCUMENT_TOKEN_TO_BE_REPLACED

Posted in General | Comments Off on Don’t give up, don’t give out. Tortures and confessions

The Anarchist Mission In The Modern World 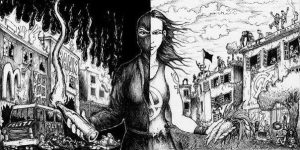 It’s not a novel idea, for today large projects aimed to rebuild the world are in decline. In the twentieth century, the powerful movements mobilized millions of people to storm political Olympus and start “great construction projects”. But during the last century, they have gone bankrupt both ethically and practically, one after the other , and soon vanished entirely. Here in particular we refer to fascism and communism of the Leninist type. Even the seemingly triumphant liberal project just basically vanished into the global capitalist system and the global political game, where liberal mechanisms are hardly seen.

END_OF_DOCUMENT_TOKEN_TO_BE_REPLACED 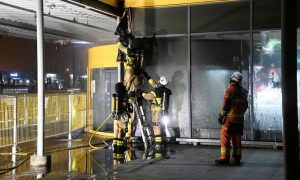 Received manifest from comrades by e-mail:

We set fire to IKEA shopping center in Malmö, Sweden on the night of March 24th. The reason for the attack – IKEA’s cooperation with the dictatorship of Lukashenka in Belarus.

This action is part of a pressure on Western capitalists who trade with the Lukashenka regime and thereby ensure its survivability. When we were planning the attack, we were inspired by the reflections of the imprisoned anarchist-partisan Igor Olinevich, who wrote in his book «I’m going to Magadan»: «“It is ok to trade even with cannibals” – this is the essence of European politics». The example of based in Sweden and currently registered in the Netherlands furniture corporation IKEA perfectly demonstrates accuracy and relevance of Igor’s conclusions.

Back in December 2018, in the wake of political rapprochement between the Lukashenka’s regime and the European Union, IKEA has adopted a strategy «Go Belarus». In the summer of 2019, Belarusian Ambassador to Sweden Dmitry Mironchik told reporters what this strategy is about. According to him, IKEA plans to purchase Belarusian goods with a value of 200 million euros. The same year, in the fall, during a Swedish-Belarusian business meeting in Minsk, Andrei Yevdochenko, at that time the First Deputy Foreign Minister, announced that in 2021 IKEA plans to increase the volume of purchases to 300 million euros.

After the beginning of the Belarusian revolution in august 2020, the Swedish media drew attention to the activities of IKEA in this country. At the end of 2020 it became widely known that seven percent of wood which IKEA uses to manufacture furniture comes from Belarus. This fact once again confirms the accuracy of Igor Olinevic’s words. In his book he described the place of Belarus in the global production chain in following way: «Economically Belarus is elementary, most environmentally filthy, raw material processing». As a result of the scandal the Secretary-General of the Human Rights Organization «Olof Palme International Center» Anna Sundström called on the boycott of IKEA products (https://www.ehandel.se/kritiken-mot-ikea-hamtar-virke-fran-diktaturen ). «Forest and Wood Workers’ Union» which is part of the Social Democratic «Swedish Trade Union Confederation» also demanded from IKEA to terminate cooperation with Lukashenka’s regime (https://www.gsfacket.se/sv/press/nyheter/kommentar-fran-gs-angaende-ikeas-narvaro-i-belarus/ ). Thus, not only anti-authoritarian left, but also a non-indifferent part of the Swedish society, which follows the situation in Belarus, condemns IKEA’s actions in this country. We, anarchists, believe that these people will understand us, will support us, and will become our comrades.

Here we will not list other IKEA’s misdeeds, such as the destruction of nature in different countries of the world and permanent impairment of workers’ conditions. Anyone can easily find information about it. IKEA’s co-operation with the Lukashenka’s regime is a more than enough reason to attack.

As Igor Olinevich and many other anarchists noted, Belarusians should not hope for Western politicians. They will not help. Only people in Belarus, by armed uprising, can destroy the dictatorship. The dirty greedy nature of capitalists, such as IKEA owners, confirms that it is necessary to fight not only for political liberation, but also for the destruction of the economic oppression, for the absolute liberation of the individual. Lukashenka’s regime trade with his accomplices from other countries needs to be blocked by radical direct action. Therefore, we will continue to attack. The words of Igor Olinovich will inspire us: «There is no linear historical path, everything can be changed!»

Posted in General | Comments Off on Arson attack against Lukashenka’s accomplices: incendiary fire at IKEA in Malmö, Sweden

There will be a new day… First results of January 23 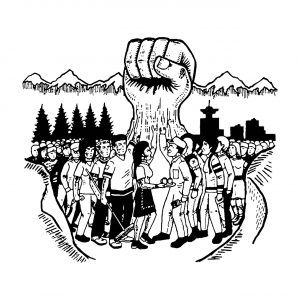 January 23 has really become a historic milestone. Not only because there were a lot of people in different cities. Today the potential has turned into reality, the energy of both rebellion and suppression has been released. Now we see their collision with our own eyes and we ourselves participate in it. The day is rich in archetypes: disgusting footage of police brutality, beaten and crushed Toyota with a flashing light as a laconic symbol of the attitude of the active part of the people to the authorities … brief sketches – complete meanings.

The same feeling was in August, when Belarus revolted. By the end of the day, an emptiness is felt in my head from the emotions overwhelming for hours.

But let’s gather strength in a heap and summarize the first results:

Today Russia has changed psychologically. Tens of thousands of people on the street today got a taste for collective action. And tomorrow they will wake up not the same as yesterday. This is the beginning of a new stage of resistance, a noticeable step forward. Starting tomorrow, we will begin to publish our recommendations on the methods of further struggle.

We want to develop them in dialogue with you, therefore, feedback and your materials are important to us.

Forward to change! Not for Navalny, but for the people!