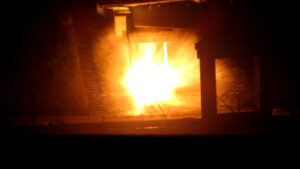 The attack took place some time ago. Unfortunately it wasn’t 100% effective but this experience will be taken into account in preparation for our next attacks. And to make it not only useful for us but for the whole partizan movement we decided to share it.

To place our detonator right in the middle of ammonal charge we’ve put a paper tube (a little wider than TT detonator) through the hole in the lid of a plastic bucket . This way two tasks are being accomplished: we can place ammonal in our container beforehand while isolating it from the external environment (it is hygroscopic). And secondly, we can place detonator with TT at the very last moment, mitigating risk.

For detonation we’ve used the ignition device made of a lamp bulb. There was a backup initiator with an alarm clock on a mobile phone, but the ignition itself was conducted with a phone call.
And also for an additional amplification of the blast we’ve placed 2 open 5-liter jugs full of an incendiary mixture near our permon charge – for a thermobaric effect due to the volumetric explosion of petrol fumes.

From the downsides – we knew of a low brisance of permon, but hoped that if placed under the bridge pillar it might be enough to collapse it. As it turned out – it wasn’t. It should have been placed in a more closed volume.

We think it’s important to note that this action was purposely carried out at night to mitigate risk for casual passersby – the bridge runs over the road, and far fewer vehicles are on the road at night, we’ve waited for such a moment when no one was there.

We won’t publish the bridge’s location in hopes that it might eventually collapse during further use.
However we call on all railway workers, who are against war, so sabotage military contracts and to refuse going to military facilities – stop being a cog in the war machine, ensuring its smooth uninterrupted work of killing people.

Also, want to remind, that the best help in struggle — to take part in it. But if you can do it personally, you always can support Revolutionary Anarcho-Fond, which works to support partizans-begginers with money for petroleum, ammonium nitrate and so on 🙂